diy Photography and Imaging in the UVIR

I mounted a SONY XC-EU50 near-UV-sensitive (300 nm to 420 nm) monochrome camera onto a Sony DCR-TRV17 MiniDV digital camcorder that displays the UV camera’s output in real-time through the LCD viewfinder and also lets me capture .jpg-format stills to its integrated Memory Stick at a resolution of up to 640 × 480 pixels (a). A 25 mm fixed focal-length UV-capable lens with transmission in the range of 230 nm to 1,200 nm is shown installed on the XC-EU50. Besides being able to document the subject under visible light, the DCR-TRV17 camcorder is sensitive to IR in its “NightShot” mode, making the setup useful for broad-range invisible photography when used with a suitable infrared long-pass filter: b) visible, c) infrared >720 nm, d) and near-UV images of some beggarticks (asteraceae bidens).

Real-time viewing of scenes in the near-UV has applications in creative UV photography, astronomy, and forensics . There are a number of CCD video cameras optimized for ultraviolet imaging that use sensors that are specifically designed for this application.  Many of these are based on Sony’s ICX-407BLA CCD chip, which is a Lumogen-coated sensor usable down to 200 nm. Unfortunately, these cameras are not inexpensive (over $3,000).

However, Sony makes one analog black-and-white machine-vision camera that is UV-sensitive which is sufficiently affordable that it has attracted some attention for use in creative, astronomical, and forensic near-ultraviolet photography.  The XC-EU50 camera has a peak sensitivity around 369 nm, and sensitivity down to 300 nm. The camera produces analog video with 768 (H) x 494 (V) effective pixels, so at 0.38 megapixels, it is nowhere near DSLR resolution, but this is not bad at all given its sensitivity in the ultraviolet. The camera retails for around $700, but surplus XC-EU50 cameras often show up on eBay® for a fraction of that price. However, the XC-EU50 is not as special as its specifications would make you believe, and DIY alternatives can be made at very low cost.

For more diy UV photography and imaging projects, check out my new book:

My daughter Abigail and I recently took a trip to Peru.  Along my Canon 6D, I took my modified Canon T1i so that I could take UV and IR pictures.  For our flight over the Nasca Lines I built a bracket to hold the cameras side-by-side, and rigged them to fire simultaneously when one of the shutter releases was depressed.

END_OF_DOCUMENT_TOKEN_TO_BE_REPLACED

Statue of Carl Zeiss at the Optical Museum Jena in Germany. The museum tells the story of the development of the city of Jena as the center of Germany’s optical industry, propelled by the lifeworks of Ernst Abbe, Carl Zeiss, and Otto Schott.

Jena is a town in eastern Germany, which is arguably the World’s capital of the optics industry. Its reputation in optics came in the 19th Century after Carl Zeiss – a microscope maker – met physicist Ernst Abbe, and glass maker Otto Schott.

In the 1880s the three formed the basis of today’s premier optical companies Carl Zeiss AG and Schott AG.

Jena’s famous Friedrich Schiller University lost its preeminence during the Nazi period due to the discrimination, expulsion, or outright murder of its Jewish professors. Its industrial basis was decimated by Allied bombings during World War II, and finally ended up as part of the Soviet-aligned German Democratic Republic. The Soviets dismantled large parts of the Zeiss and Schott factories and took them into Soviet Union.

Industry in Jena came into a heavy crisis after the German reunification in 1990 and the subsequent collapse of the Soviet Union. However, Jena managed to transition to the market economy, and today it is one of the leading economic centers of eastern Germany.

If you are ever in the region, you must take some time to visit the Optical Museum Jena. It showcases the lifeworks of Ernst Abbe, Carl Zeiss, and Otto Schott. Because of Jena’s difficult 20th Century history, its small antique shops are a treasure trove of optical relics that are sure to interest any technical-minded photographer.

Imaging in the shortwave ultraviolet spectrum (wavelengths below 300 nm) enables some very exciting applications. Light in these wavelengths is completely invisible (but potentially very harmful) to the unaided eye. I am most interested in a band known as “Solar Blind UV” or SBUV. As shown in the following figure, solar radiation in the 240 nm to 280 nm range is completely absorbed by the ozone in the atmosphere and cannot reach Earth’s surface, thus allowing ultraviolet-emitting phenomena (e.g. electrical discharges, hydrogen combustion, etc.) to be detectable in full daylight.

Certain ultraviolet-emitting phenomena, for example electrical discharges and breakdown in high-voltage power lines are almost undetectable in the visible range (a), but emit strongly in the UV-C region (b) which daylight lacks, allowing visualization in full daylight by superimposing the UV-C and visible images (c). d) The spectral content of sunlight is heavily modified by the Earth’s atmosphere, and shows various dips that correspond to different gases absorbing energy at different points in the spectrum. Ozone in the atmosphere absorbs very heavily in the UV-C band (100 nm to 280 nm), so virtually no sunlight in that wavelength range reaches Earth’s surface. The darkest part of that range – 240 nm to 280 nm is known as the “solar-blind” band. Pictures a-c courtesy of Eran Frisch, Ofil, Ltd

END_OF_DOCUMENT_TOKEN_TO_BE_REPLACED

Reader Paul Wallace contacted me to tell me about the DOLPi electro-optic polarization camera that he built for his iPhone.  His ingenious solution makes use of the iPhone’s flashlight to calibrate and synchronize the control of the polarization analyzer (hacked from a welder’s mask as described in the DOLPi whitepaper).

END_OF_DOCUMENT_TOKEN_TO_BE_REPLACED

In 2006 Fuji started selling a UV/IR-capable version of their FinePix S3 Pro to law enforcement, scientific, medical, and fine art users. The camera had been modified in-house to replace the internal ICF/antialias filter stack by a transparent glass window. This S3 is shown here with a home-made lens and Baader-U filter.

In the film days, police forensic units were the main users of ultraviolet photography. As digital photography started to replace film, forensic units felt left behind the times. In August 2006, Fuji started marketing a UV/IR version of their FinePix S3 Pro DSLR. The camera was aimed primarily at law enforcement, scientific, medical, and fine art users.

The camera was a stock FinePix S3 Pro that had been modified in-house to replace the internal ICF/antialias filter stack by a glass window transparent all the way from 280 nm to 2,500 nm (Schott glass type WG280). The camera was pricey, sold only to select clients, and didn’t give especially good results at shorter wavelengths, but allowed serious users to start experimenting with DSLR photography in the IR and UV, which resulted in publications showing that digital photography had come of age for these specialized modalities. This information percolated to enthusiasts who started exploring the field of creative IR photography as DSLR prices dropped and cameras that could be modified started to enter the second-hand market. Today, a low-cost DSLR camera can be modified by a committed enthusiast for around $150 and beat the performance of the legendary FinePix S3 Pro UVIR.

A direct comparison between the legendary Fuji S3 Pro UVIR camera and a modified Canon T1i shows the latter to perform slightly better for ultraviolet photography.

Do you want to learn how to modify and use a stock DSLR for near-Ultraviolet photography?  Then check out my new book: 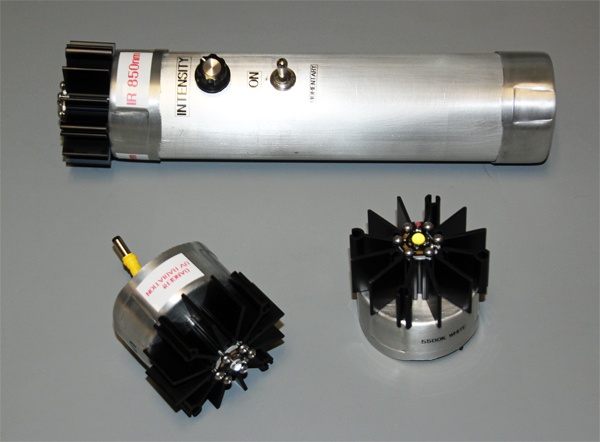 Some time ago I needed a high-intensity UV/IR/visible light source for a work-related industrial inspection project, so I recruited Abigail to help me build a 10W LED flashlight that features swappable UV/IR/visible heads. We decided to document the build since this flashlight would fit nicely in a photographer’s kit for light painting, IR illumination, UV reflected photography, or UV fluorescence photography.

Our flashlight is based on LedEngin’s LZ4-40____ series 10W LEDs. These are available in wavelengths ranging from the infrared through the ultraviolet. White-light LEDs of different color temperatures are also available as part of this series.

WARNING! This flashlight is capable of producing very powerful invisible radiation in the UV and IR. The eye’s protection reflexes do not work at these wavelengths, and may thus cause extensive damage if exposed to direct or specular illumination. Never point this flashlight at anyone without taking proper precautions!

END_OF_DOCUMENT_TOKEN_TO_BE_REPLACED

I developed the DOLPi-UI filter-wheel-based all-mode camera capable of working in the infrared-visible-ultraviolet range both for imaging and polarimetric analysis. I added a FLIR Lepton® module to extend the camera’s imaging capability (though not polarimetry) to the longwave IR (“thermal” IR).

DOLPi-UI is based on the Raspberry Pi NoIR camera, two servos, two filter wheels, a servo hat, and a Raspberry Pi 2.